Now. I do not claim to be a sewer. I mean, I sew, but I really BARELY know how to use our sewing machine. So probably a hundred things are wrong with these and I used a bing-blong stitch when I should have used a nappy stitch or something. Loose threads everywhere. Uneven hems. Visible threads. Mistakes galore. This is not a professional seamstresses project. I did the best I can. The best I can pretty low on a sliding scale, though.

However. From a distance, they look good. And whenever I post a picture of Carys wearing her capes on Instagram or Facebook. I get questions on how I made them.  So maybe there are other non-sewers like me out there who are looking for inspiration for their similarly-obsessed kids. 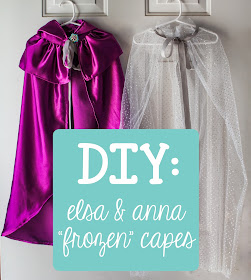 Like 2/3 of kids under the age of 30, Carys is completely in love with the movie "Frozen." So much so that she has an entire routine for the "Let It Go" song, complete with *exact* choreography and costume changes, which I of course have recorded and uploaded to YouTube and which YouTube promptly blocked since it had the actual "Let It Go" song in the background.  (Instagram isn't so picky: Here's a quick clip of her early version - it's become much more sophisticated since then.)


At her second cousin's "Frozen" themed birthday party and in heaven.
Best part of the picture is the kid in the background. 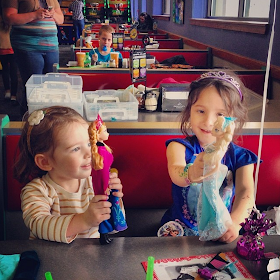 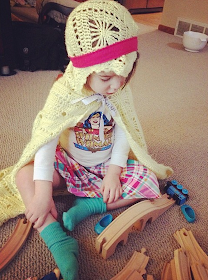 I thought it would be a FANTASTIC idea to make her an actual cape like Elsa and Anna have in the movie. Seriously, BEST MOM EVER is what I was going for. I thought she'd flip her lid, especially since she saw the fabric before I did anything with it and knew immediately that it was "Frozen" costume fabric (in the video linked above, she's playing with the raw yardage).

Well, the day I introduced the capes to her (after having SLAVED over them), she was having a terrible day and didn't want anything to do with them. She just went right back to her blanket-cape. I was completely crushed.  I did get her friend Leah to wear it, though. 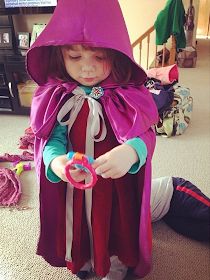 Eventually, Carys did come around to the capes, though, and now they are absolutely required wearing any time we watch the movie and/or just the "Let It Go" song (which is a lot) (like a lot a lot). 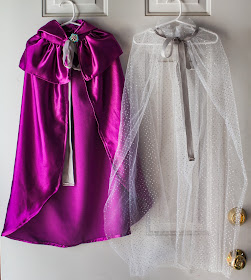 I made a kind of Elsa/Anna hybrid cape with a hood, because when she was using blankets as capes, she always gave them a hood. So even though neither Elsa nor Anna have hoods on their capes, I thought she'd appreciate the extra touch. You can easily modify these instructions to do it without the hood. 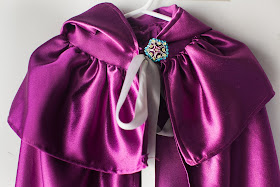 I also used a shiny fabric that unravels like crazy and is a total bitch to hem. If you are a crappy sewer like I am (or even a non-sewer) you might want to consider using something like a lightweight felt. You won't have to serge or zig-zag stitch the cut seams at all, you won't have to hem, and it will go approximately 124% faster. You also won't have to worry about the "right" and "wrong" side of the fabric since it's the same on both sides (if you're a beginner - the "right" side of the fabric is the side that you want to see; the wrong side is the "inside" of the fabric).

I used about a yard of fabric for the purple cape. I got it at Joann's - I just wandered around until I found this fabric that looked like it was the right color. In hindsight, it was kind of a huge bitch to work with. 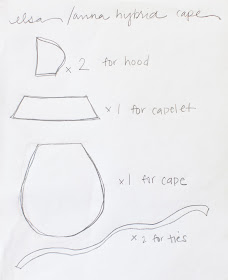 HOOD:
To create the hood,  I took a hoodie that she already owned, laid it down while folded in half, and traced the shape onto paper, then enlarged it a bit to account for seams (so you'll end up with kind of a "D" shaped pattern). Then trace that pattern onto your fabric twice, since you need two hood pieces. Cut two hood pieces.

CAPELET AND CAPE:
Measure your kid from the shoulders to where you want the cape to end (I did calf-length) to determine how long the cape should be. I used a rounded, curved shape for the cape - you could just as easily (actually WAY more easily) do a rectangular shape for yours.  I then eyeballed the length of the capelet (the shoulder part) based on the length of the cape. I just drew right on the fabric for the cape since it didn't have to be exact, but you could do it onto a piece of paper first to get the shape exactly right. Don't forget - since the final product will be gathered, the raw pieces should be much wider than you want the final product to be. At least twice as wide. On the final product, the width of the cape (after it's gathered) will be equal to the width of the open hood, so you could use 2x the length of the open hood as a measurement for the width of these pieces.  Cut one capelet piece and one cape piece.

2. If needed, serge/zig-zag stitch the top of  the capelet and cape pieces, and hem the other sides (see illustration). Sew a gathering stitch along the top of each piece and gather them to match the width of the hood and each other. (Not sure how to gather? Check this link.)

3. Lay the capelet on top of the cap, pin in place, and sew them together (both pieces of fabric should be facing the same way - so when you're looking down at it you should see the right side of both pieces).

(What kind of drugs was I on when I wrote step one?
I think I meant "sew hood pieces wrong side together") 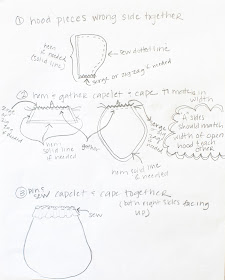 5. Cut ribbons to the desired length. If your ribbon will fray, fold the ribbon onto itself and sew across (or go the easy route and paint clear nail polish along the bottom of it, or lightly burn it with a lighter).  Sew the ribbons to the inside of the cape on each side. I did it along the seam where the hood and cape met, using a zig-zag stitch and going over it several times so it was secure. 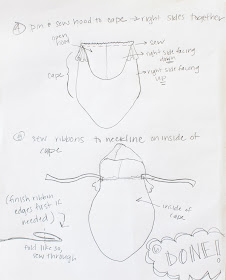 6. I randomly found a button at Joann's that looked a lot like the brooch that is on Elsa's cape, so I bought it and added it to the side of the cape where the ribbon comes out. Totally optional.


Inside of cape showing all the seams. Pretend like this isn't blurry. 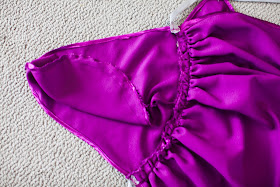 Hemming the edge of the cape. 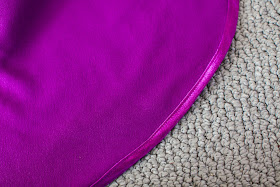 Ribbons folded over and sewn through. I used a decorative stitch and contrasting thread. 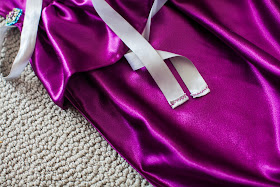 The hood looks really tall/long - and it is. I did it that way to get that drape-y effect when worn (see picture of Leah wearing it). Also, is that a crumb on the carpet? Yes. 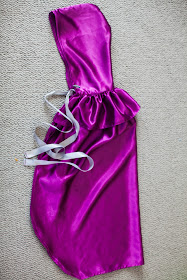 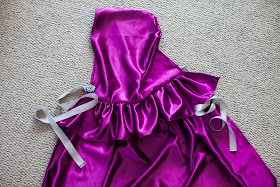 Technically, when Elsa transforms into the ice queen (SPOILER ALERT) she isn't wearing a cape; it's actually part of her dress. But for dress-up purposes, this works nicely. 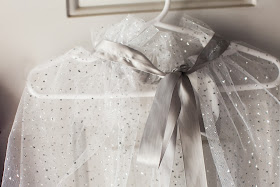 I found a piece of tulle at Joann's that had silver glitter dots all over it. Any type of sheer, sparkly fabric will do nicely. The amount you need will depend on the width of the fabric; I used half a yard, I believe, but it was very wide fabric. 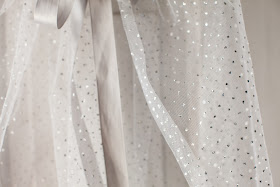 This cape is ridiculously easy, because the fabric doesn't need to be hemmed or the edges finished in any way. (Yes, you could get all crazy and use piping around the edges or do a million other things, but I'd just devoted 1/3 of my life to creating the purple cape, and I was spent.)

You need a piece of fabric that's at least as tall as your child (I made mine even longer, to drag on the floor like Elsa's does in the movie) and at least twice as wide as you want the final width, and a piece of ribbon long enough to go across the back of the cape and be tied in front. 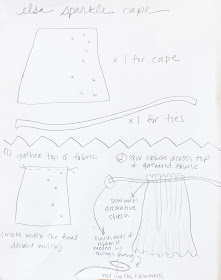 1. Sew a gathering stitch across the top of the fabric and gather to desired width.

2. Pin a ribbon across the top of the fabric, with the ends extending out on each side to act as the ties later. Sew in place with a decorative stitch. Finish ends of ribbon if needed (folding it over and stitching shut, or using nail polish or lightly burning the ends). 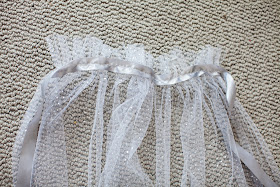 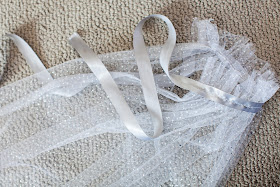 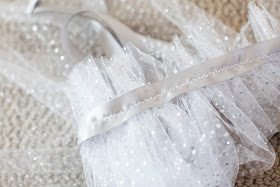 I see mistakes in both capes all over the place, but I'm really ridiculously proud of them (especially the purple cape) and Carys absolutely loves them (now. thank god.).  And no, there is absolutely zero chance that I'll be selling these on Etsy anytime soon. Doing these two sapped all my sewing ability for the next five years. 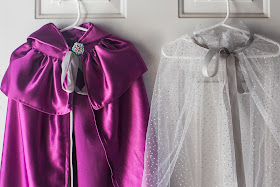