Climb On : Preferably Without Injury

I went climbing with my sister today and almost killed her. And in the process ripped a bunch of skin off my pinky.  But I learned an important lesson: when belaying, let the rope out slowly and keep your fingers away from the ATC device.

Listen to me, dropping lingo like I know what I'm talking about. LAUGHABLE. I'm still such a beginner. A newb. A no0b, even. But in the most simple of simple terms, belaying = holding the rope for the person climbing and keeping them from falling (hint: I failed at this). ATC device = I don't know what this stands for, but it's a little thing that the rope goes through when you're belaying someone that helps control the rope and provide friction. Google tells me ATC stands for air traffic controller, which....okay? I guess? I don't get it.

We go top-roping, which means that the climber is attached to a rope when climbing (and the belayer has the other end to keep the climber safe). After she reached the top of the wall, it's my job as the belayer to lower her back to the ground. I went a little too fast when lowering her and lost control a little bit and ripped the skin of my finger a little bit and, um, dropped her a little bit. Luckily she was almost at the ground and luckily there are thick mats surrounding the climbing wall, so she didn't get hurt.

BUT MY FINGER THO.

(Actually hurts quite a bit.) 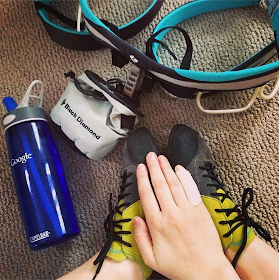 (that's a Black Diamond Harness and chalk bag, FiveTen Rogue shoes, and a Camelbak water bottle WHICH I LOVE OH SO MUCH)

When you climb indoors at a gym, there are holds bolted all over the walls and specific routes marked, meaning that you can only use specific holds to get to the top (for example, you can use only ones marked with yellow tape).  They give the routes punny names, like "Florist Gump." Each route has a different difficulty level, based on a number of factors, like the sheer number of holds available to get up, the type of holds ("jugs" are holds that you can grab and get your fingers into and are the easiest type of hold to use, whereas "crimps" are these tiny motherfuckers that you can't really grab and can just barely get your fingertips on - a more difficult route would be low on the jugs and high on the crimps, for instance), the amount of overhang, etc. Traditionally, the hardest move on a route determines the grade. So if a route is incredibly easy but has one really difficult move, it's rated on the level of the really difficult move.

The ratings go from 5.0 to 5.15, with 5.0 being the easiest and 5.15 being the hardest. I know. It's a weird system. 5.0 to 5.5 apparently don't really exist. I guess? At least not in my gym. I trained on the one 5.6 route that they have.  Then I've done two 5.7s to completion. There are two more 5.7s that I'm working on (a route you're working on completing is called your "project").  There's a huge leap between ratings and a huge range within each grade (hence being able to complete the one 5.6 route the gym has easily but still struggling on 5.7s). My sister, who has been going for almost a year, is still on 5.8s (though she's about ready to move to 5.9s). My other sister, who has been going just a couple months, is also on 5.8s, just to put it in perspective.

We also boulder a little bit, which is climbing without being attached to a rope. You can't go up nearly as far safely (the bouldering wall at our gym tops out at maybe seven feet?) but there's a ton of overhang and a ton of strength needed for even the easiest routes. You often start with a sit start, meaning you're literally sitting down and grabbing the rock from that position, so it takes a ton of strength to pull up from that position. Bouldering routes are rated from V0 to V16, and there ARE routes all the way down to V0. I've done a V0 but am struggling on a V01 (harder than a V0, but easier than a V1).  Like I said, there's a HUGE difference between difficulty ratings.

Also, I'm pretty sure boulderers look down on top-ropers. I think there's some rock-climbing hierarchy and I'm at the very bottom of the very bottom.


Here is the face of an exhausted, injured beginner climber 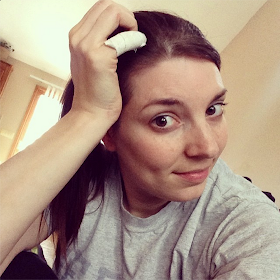 All that is to make this next part make even the slightest bit of sense to all you blog readers (ALL THREE OF YOU!) - I want to keep a running log of where I'm at and what I'm working on, and of course it only makes sense to do it publicly in order to ensure the most humiliation when I fail. Right?